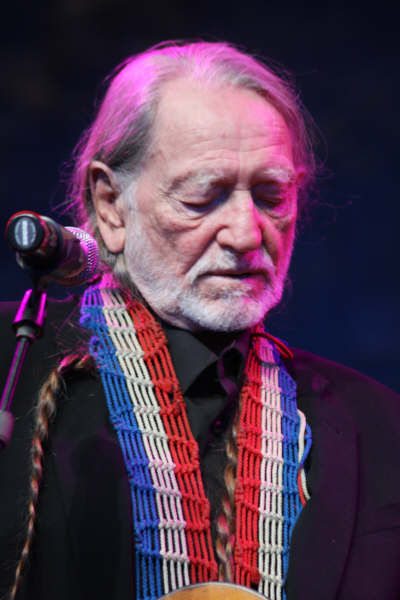 To say he has led a full life would be life’s greatest understatement. It hasn’t always been pretty, but it has always been real. It didn’t take Willie long to go from unknown songwriter in Nashville in the 60’s to outlaw in the 70’s, to household name in the 80’s, and then on to genuine legend. Patsy Cline gave Willie his first #1 single with “Crazy.” Ray Price recorded “Night Life” and Billy Walker recorded “Funny How Time Slips Away.” But for a man who always knew he wanted to do it his own way, Nashville was too confining. Texas got its native son back. Even though he is probably still considered by many to be a country writer, Willie’s style defies definition. The voice you will recognize, but the song can come from any direction. His songs have combined traditional pop, Western swing, jazz, traditional country, cowboy songs, honky tonk, rock & roll, folk, tejano, conjunto, gospel, and the blues into a distinctive sound that belongs only to Willie. He is a prolific songwriter. Go to the Broadcast Music, Inc. website and you will find 341 songs written or co-written by Willie. Fifteen songs have earned BMI’s highest awards, such as “Angel Flying Too Close to the Ground,” “Funny,” and “On the Road Again.” Additional awards have come from other sources, such as County Music Association, National Academy of Popular Music, and NARAS/Grammy. Other singers have become so closely associated with some of his songs, you might forget Willie wrote them: co-writer Waylon Jennings singing “Good Hearted Woman;” George Jones singing “Yesterday’s Wine,” Faron Young singing “Hello Walls,” and, of course, Patsy Cline on “Crazy.” But Willie the singer has returned the favor by putting his stamp so firmly on other’s songs, it seems as though he wrote them: “Whiskey River” (Johnny Bush), “Mamas Don’t Let Your Babies Grow Up to be Cowboys” (Ed and Patsy Bruce), “You Were Always on My Mind” (John L. Christopher, Jr., James Mark, and Wayne Carson Thompson), and “I’d Have to be Crazy” (Steven Fromholz). The Texas Heritage Songwriters Association proudly honors Abbott native Willie Nelson for his contributions as a leader in Texas songwriting.