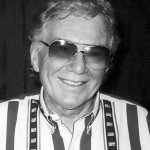 That helped lead to a record deal with Columbia Records, who issued their first album, The Kooky World of the Geezinslaw Brothers, in 1963. They recorded four albums for Capitol between 1966-1969, scoring hit singles with songs like “Chubby (Please Take Your Love to Town)” and “You Wouldn’t Put the Shuck on Me.” They continued to appear on TV variety shows, including those of Johnny Carson, Ed Sullivan, and Jackie Gleason, and became regulars on Ralph Emery’s radio program Pop Goes the Country. They returned to recording in 1989 with The Geezinslaws, which mixed song parodies with more straight-ahead country. 1990’s World Tour followed a similar pattern, and 1992’s Feelin’ Good, Gittin’ Up, Gittin’ Down gave them their first chart single in over two decades with “Help, I’m White and I Can’t Get Down.” They issued a full-on comedy record in 1994 with I Wish I Had a Job to Shove. Allred continues to perform with the Geezinslaws in addition to celebrating over 15 years on the air at KVET with his morning DJ partner, Bob Cole.