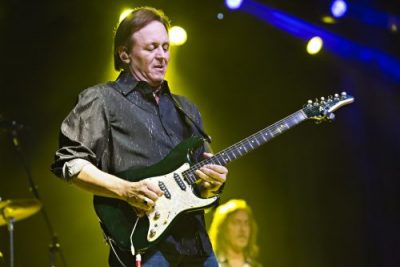 James Hayden Nicholas is a Grammy-nominee songwriter, whose songs are known and loved by a generation of country music fans. The author of such modern classics as “Killin’ Time,” and “A Better Man,” Nicholas is also an acclaimed guitarist and producer. His collaboration with country music star Clint Black is in its third decade, and his compositions have dominated the radio airwaves, appeared in film, on broadway, and have catapulted albums to the top of the charts.

Nicholas (born 1957) grew up in the Houston, Texas area, where he taught himself to play guitar at age nine. In the early 1980s, he was briefly a member of the band Revolver, headlined by Tim McCrary. After a stint living in California, he returned to Texas, where, in 1987, he met then-struggling country singer Clint Black. At the time, Nicholas was a guitarist and songwriter with his own home studio. The two joined forces to write and record demo versions of songs that Black could use to land a recording deal. It was during their first project of recording ten of Clint’s songs that Hayden introduced a musical idea to which Clint had the perfect lyrical response. “Straight From the Factory” was born. The first song they finished recording was “Nobody’s Home“, which led Clint to his recording contract with RCA Records. 1989 began an extraordinary run of chart success for Nicholas, “Killin’ Time” as recorded by Black, hit number one on the hot country charts. Since that time Hayden has co-written over seventy-five songs with Clint for his ten albums to date, fifteen of them “Number Ones”. He has received multiple Grammy nominations, two, CMA nominations for “Song of the Year”, and over fifty songwriting awards including three “Triple Play Awards” (three number one songs in a twelve month period). His composition, “The Hard Way,” was included in the Broadway musical Urban Cowboy, which was nominated for a 2003 Tony Award for Best Original Score. The partnership between Nicholas and Black continues strongly to this day. Hayden continues to play guitar with Clint in the studio and on stage where he is also the band leader. Their latest collaboration, “Easy For Me To Say“, was written while on a skiing trip in Lake Tahoe. Hayden lives in Austin, Texas where he and his wife Diane, built their home in 1996. Along with spending time with his family and working with Clint, Nicholas has expanded his efforts, co-producing the debut album of Texas band Cooder Graw and serving as sole producer on the band’s second attempt. Hayden has played on Asleep at The Wheel’s “Ride With Bob” album and completed a lifelong wish to write a novel, Hands’ Treasure, which has been sold to a motion picture company.