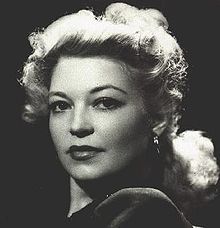 Walker was writing songs by the time she was 12. Traveling to Los Angeles with her family in 1941, she insisted her father stop the car when she saw a building that housed Bing Crosby’s offices. An impromptu meeting with Crosby’s brother led to the singer recording Walker’s “Lone Star Trail.” In Hollywood, Walker also landed a recording contract with Decca Records, began writing songs for singing cowboys and appeared in a series of short musical films known as “soundies,” a precursor to music videos. It was also in Hollywood where Walker first met Bob Wills, who eventually recorded more than 50 of her songs, including more than 30 that were featured in his movies. Walker’s tenure on the West Coast also led to several other hits, including Eddy Arnold’s “Take Me in Your Arms and Hold Me” and Ernest Tubb’s “Warm Red Wine.” In 1954, Walker and her mother moved back to Texas, and Walker began spending more time in Nashville. Although Arnold’s 1956 recording of “You Don’t Know Me” only reached No. 10 on the charts, their co-write is acknowledged as one of the greatest country classics of all time. Walker had additional success with Hank Snow’s “The Gold Rush Is Over” and “The Next Voice You Hear” and George Morgan’s “I Love Everything About You.” Other Walker hits include Gene Autry’s “Blue Canadian Rockies,” Jim Reeves’ “Distant Drums” and “Anna Marie,” Sonny James’ “Heaven Says Hello” and Jerry Wallace’s “In the Misty Moonlight.” Indicating the timeless quality of Walker’s songs, Ray Charles’ version of “You Don’t Know Me” was a highlight of Modern Sounds in Country & Western Music, his groundbreaking album from 1962. Mickey Gilley had a No. 1 hit with the song in 1981, and Ricky Skaggs topped the chart a year later with “I Don’t Care,” originally a 1955 hit for Webb Pierce. Her songs have been recorded by a long list of artists, including Merle Haggard, Glen Campbell and Michael Nesmith. Walker was inducted into the Country Music Hall of Fame in 1997. Willie Nelson issued an album of her songs in 2006. She died in Mexia, Texas, on March 23, 2006.