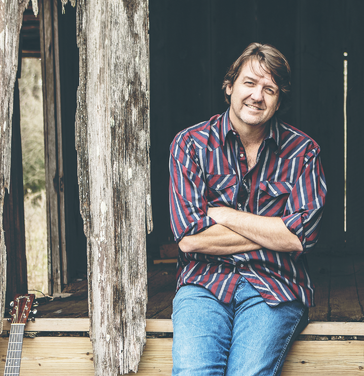 Bruce Robison is one of the newest and biggest stars in the Texas songwriting firmament. His songs have been recorded by artists including the Dixie Chicks (“Travelin’ Soldier“), Faith Hill & Tim McGraw (“Angry All the Time“) and George Strait (“Desperately” and his current hit single, “Wrapped“). Although these acts have taken his work to the top of the charts, no one interprets a Bruce Robison song like the writer himself.

With a voice as unadorned and unaffected as his home state’s wide-open spaces, Robison has a laid-back vocal knack for easing the listener into a song’s emotional core. Growing up in the small Hill Country town of Bandera, Robison and his brother Charlie, another successful singer-songwriter, started playing music in their garage, eventually graduating to playing local dances and rodeos. In the early ’90s, they made the move to Austin and dove headlong into that city’s vibrant singer/songwriter scene, falling in with a creative crowd that included frequent co-writer Monte Warden and Kelly Willis, who later became Bruce’s wife. “Doug Sahm was a big influence on me,” Robison says. “He was somebody who busted out of Texas, and I knew his hits when I was growing up. I was lucky in that the kind of country I heard at first – from Willie and Waylon and those guys, to Gram and Emmylou and over to Doug – was changing what people thought about country music. Doug always represented that to me and was a classic example of someone who was unclassifiable.” Robison’s self-titled, indie-label debut was released in 1996, and the singer/songwriter was soon making regular trips to Nashville. A publishing deal and a major label record contract quickly followed.

After two critically acclaimed albums – 1998’s Wrapped and 1999’s Long Way From Anywhere – failed to catch fire on radio, Robison, collecting royalties from lucrative cuts with Strait and Lee Ann Womack, returned to Austin and indie life, releasing Country Sunshine in 2001. In the five years between that release and 2006’s Eleven Stories, Robison and Willis got busy. Four bouncing babies later, a bleary eyed Robison is still perfecting the process of putting all of it, somehow, into a song. Committed to the Austin independent music scene, Robison established Premium Recording Service, a state-of-the-art studio, in 2005. “The music that comes out of Austin and out of Texas is really amazing, and we need to make better recordings, so that’s the origin of Premium,” he says. To me, the music is at the frontier now. It seems like the ’50s again, and nobody really knows how it’s going to sort out. I’m really excited to be a part of figuring out where it’s headed… we’ll see how it shakes out.”