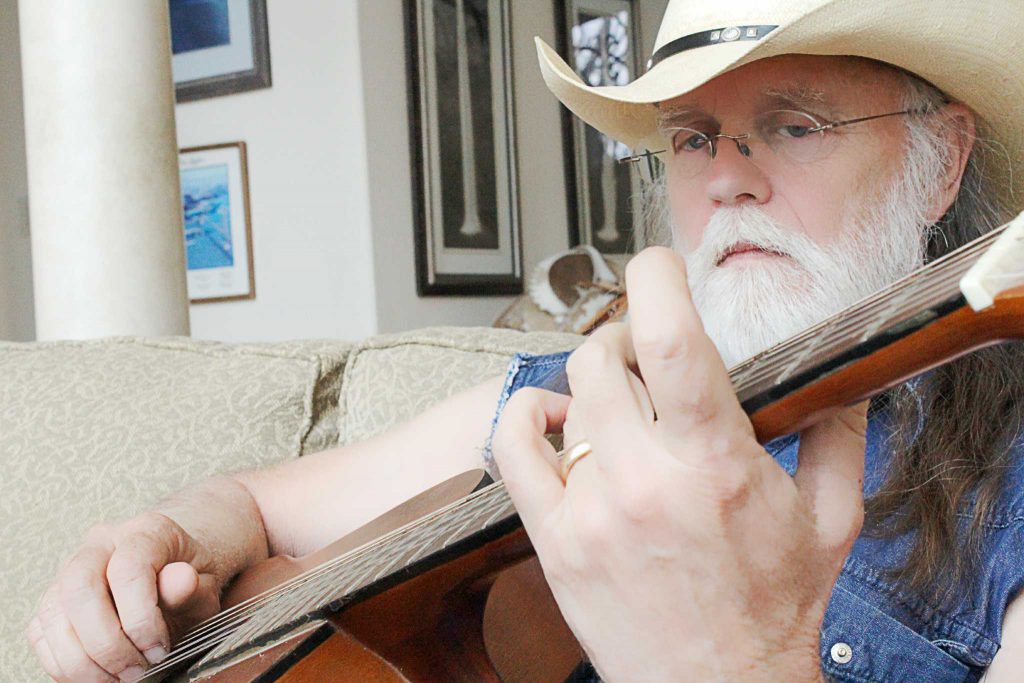 Aaron Barker was born in San Antonio, Texas, and began his musical career in a “variety band” at the awkward age of thirteen. He stayed with his band for many years and played everything from Bob Wills to Bob Seger. Driving his bus from place to place, he began playing with original melodies and lyrics hoping to create his own songs. His first attempt, “Baby Blue,” recorded by George Strait on the If You Ain’t Lovin’, You Ain’t Livin’ album, went number one in Billboard.

Not knowing what this meant to his future, Aaron continued to work in the band and played songs for anyone who would listen until he got his first check. Aaron began developing his own sound, and refining his original material in small clubs and cafes where he would play on weekends. One night after a long father and son talk, he wrote “Love Without End, Amen.” Believing this would be a song that he would play for his family, Barker decided to see what would happen if he sent it to George Strait. Strait recorded it and it stayed at the number one position in Billboard Magazine for five consecutive weeks. After an unsuccessful recording deal with Atlantic Records, Aaron began his writing again. He landed two number one singles in a row on George Strait’s Easy Come, Easy Go album: “I’d Like To Have That One Back” and the title cut. Doug Supernaw released “Not Enough Hours in the Night,” and George Strait released “I Know She Still Loves Me” which can only be found on his box set along with four other great songs of Aaron’s. “I Can Still Make Cheyenne” was also released by George Strait and went straight to the number one position. Aaron has had several other artists record his songs, including Clay Walkers’ release “Watch This,” and “You’re Beginning To Get To Me,” Neal McCoy’s “Love Happens Like That,” Aaron Tippin’s “I’m Leavin’,” and Lonestar’s single “What About Now.”

Aaron says “These are real stories about real life, I’ve lived a lot of life and I also drawn on the lives of people I have crossed paths with.” His background and the knack for honest, heartfelt communication has molded Aaron Barker into a songwriter of depth and power, as well as making him a dynamic entertainer. This and more information is regularly updated on our website at www.aaronbarker.com. Aaron released a gift book written about his #1 Hit “Love Without End, Amen.” The book carries a simple, timeless and universal theme “A parent’s Love for a child is truly unconditional.” George Strait was kind enough to add an elegant introduction and included a CD of the recording tucked in the back. Of special interest to people in the Southern tier of the United States Aaron also writes and sings the Blue Bell Ice Cream Commercials. Such as, “Have Yourself A Blue Bell Country Day,” “What Are They Doin’” and “Good Old Days.”